Fremont Ellis (1897-1985) Fremont Ellis, unlike so many other artists during this time period, was born and raised in the American West. His family had traveled to Montana during the Gold Rush, his father a trained dentist, dabbled in mining and eventually went into show business. Ellis was born in Virginia City, Montana on October 2, 1897 and as a child the family traveled all over the country. Due to this lifestyle, Ellis did not have a formal education past the first grade. In 1910 the family moved to New York and Ellis fell in love with the paintings in the Metropolitan Museum of Art. He briefly attended the Art Students League, but ultimately returned to his beloved Western landscape.

Upon returning to the West, Ellis first moved to El Paso, Texas. He then traveled to Santa Fe, where he joined his friends Willard Nash, Jozef Bakos, Will Shuster, and Walter Mruk. Together they formed the Los Cinco Pintores, modernist-tending artists who had their first of several exhibitions in the Museum of Santa Fe in 1921. Ellis married and spent a period of time in Espanola, later settling about ten miles east of Santa Fe in one of the most beautiful haciendas in the area.

Ellis is known for his rich, colorful, impressionistic depictions of the New Mexico landscape. 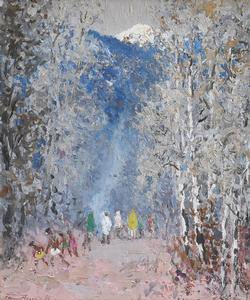 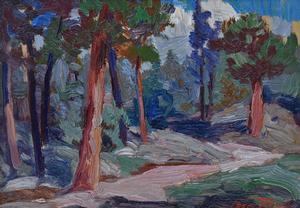 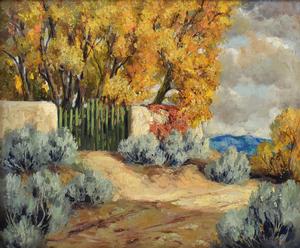