Gene Kloss (1903-1996) At a time when women were not well known for successful art careers, Gene Kloss captured the attention of the Western art world with her mastery of the etching. The scenes she depicts are crisp with subtle tones that are not easily achieved with the medium. Her art captures the daily life of the New Mexican Pueblos and vast landscapes of the Southwest, including Colorado and New Mexico.

Kloss was born in California in 1903 with the name Alice Geneva Glasier. After marrying Phillip Kloss in 1924, she shortened her name to Gene Kloss, hoping, in part, that the more masculine form would help her work draw less prejudice when viewed for exhibitions. Kloss fell in love with the landscape and culture of New Mexico on her honeymoon and from that point forward the couple split their time between Taos and Berkley, CA.

Her etchings have a painterly quality to them that is not often seen with the medium. She attained this by developing technique of applying acid directly on the copper plate with fine brushes. Every etching was printed by the artist and it was only in the late 1970s that she bought a power-driven massive press built to her specifications. She was a meticulous craftswoman. She did not complete an edition in one printing. There may be years between the concept and the final print in an edition. Kloss created over 600 etchings over the course of her career. Gene Kloss is among the most important American women artists and printmakers of the 20th Century. 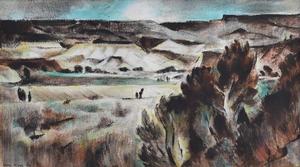 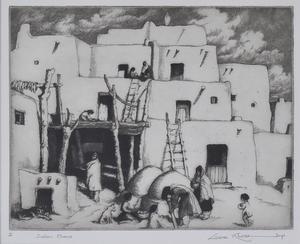